Montgomery County Planning Department has just finished compiling the 2010 Ward populations for the City of Amsterdam. It looks like the 4th Ward has some boundary trimming to do as it is over the mean population of 3,724. Wards 3 and 5 need to increase their Ward boundaries to achieve the equitable population distribution. 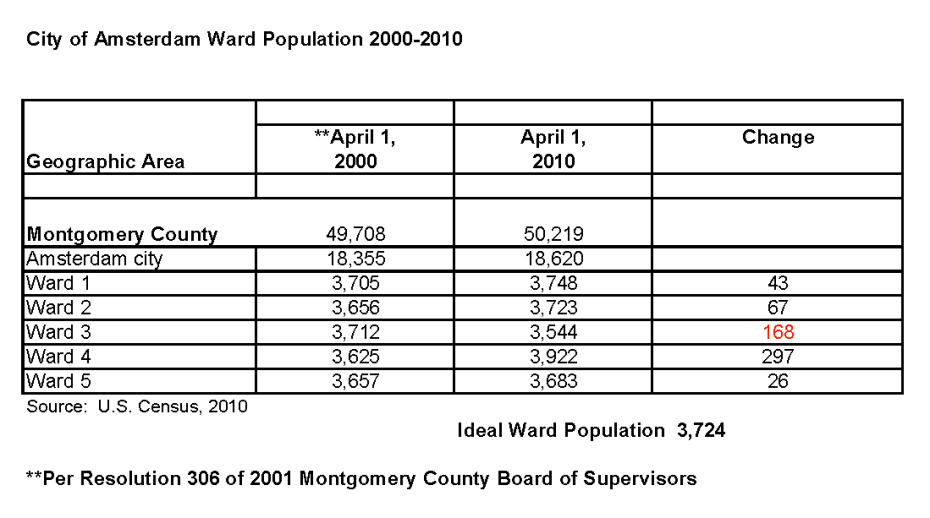 According to the Amsterdam City Charter, the Common Council has three months to come up with the adjusted boundaries.  This is especially important for the upcoming City elections later this year.

Let’s see how our current elected officials respond to this Charter mandate. This simple task should prove their worthiness for reelection.

Mayor Thane has already bottomed out by suggesting this task be accomplished by some college students. The Mayor carelessly spent $4,000. of taxpayer money for Christmas lights on Main Street and another $800. for window decorations for the Winter mixer but has not suggested hiring a professional to redraw Ward boundaries.

Mayor Ann Thane on Tuesday said she is waiting for numbers from the Census Bureau to determine what changes might need to be made. She said she is considering getting students at local colleges, such as Union College or the College of Saint Rose, involved in a project to get it done while getting some experience in government. “I think it would be good for them,” the mayor said.

Changing her tune in Tuesday’s paper the Mayor makes the following statement:

“I think this might be a very good opportunity to invite the council to work collaboratively to establish the new lines,” said Mayor Ann Thane. “I think it’s important to know why, so that you can plan for the future, so we’ll be looking at that,” she said. “It should be a very interesting discussion.” It’s all a discussion the mayor thinks can be handled by the Common Council, calling it a job they were elected to do.

The job should go to Montgomery County Planning Department who are already on top of this important challenge.

Do the Right Thing!

Much has changed in 30 years, including the ethnic makeup of Amsterdam that is now 26.2% Hispanic or Latino.

We are by far, the most densely populated area in Montgomery County with 3,176.3 persons per square mile. It is that population density that determines how we are represented in City Hall.  According to our City Charter, Ward boundaries are to be adjusted within three months of the issuance of the Federal Census results.

Within three months following official publication of the results of each federal decennial or quinquennial census, if such has been conducted, the Common Council shall review the ward boundaries in relationship to the census results and make such adjustments by local law as may be necessary to assure that each ward contains, as nearly as practicable, an equal number of residents.

My research indicates that this Charter mandate has never been carries out (since the reconstitution of the Common Council in 1982). The language in the Charter Law is “shall” not “may,” indicating this is not an optional procedure.

Just as Congressional redistricting is adjusted according to current population statistics, our City Ward boundaries must be examined and if necessary changed to effect equal representation in local government.

The list of 2010 census population by current Ward boundaries should be made public.

To our elected City Council representatives I issue this challenge …

Do the right thing!