Her Majesty Queen Ann Has Spoken!

The Montgomery County Board of Supervisors sent a letter to Mayor Thane expressing their disapproval of eliminating the water fee cap. In response the Mayor sent the following long-winded letter containing several seemingly fabricated facts.

…the city and my administration are committed to economic
growth and to providing the infrastructure for that growth.
Necessary infrastructure goes beyond water and sewer lines; it
includes police and fire protection. Cuts that would close the revenue shortfall without a water rate increase would damage the effectiveness of these departments. High crime and high fire insurance rates have a cost to residents that cannot be ignored.

High crime and high fire insurance rates? The City of Amsterdam has a crime rate that is lower than the national average. Do we really need 43 police officers to cover the 5.9 miles that make up our city? My homeowners policy protects against fire and the price is not increased because I live in Amsterdam.

It is my duty as Mayor to do what is best for the residents of the city as a whole. That means protecting the taxpayer’s financial interests even when those interests are not well understood by the public at large.

Apparently Queen Ann puts little faith in her subject’s ability to comprehend.  We know all to well that we pay the 11th highest property taxes in the NATION!

The entire letter can be seen here:  Response from Mayor Thane.

The Monday night Budget Review Committee decided once again to remove the 3% cap on water fees after much protesting on the part of Mayor Thane of the cuts proposed by the Aldermen. 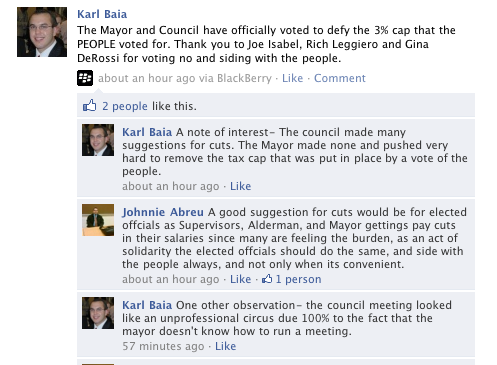 Ann Thane needs to realize that she is paid to represent all the PEOPLE, not just the special interest groups that she wants to promote. This is not a dictatorship or a monarchy and Ann Thane must be voted out this fall. We cannot endure another 4 years of wasting the taxpayer’s money on window-dressing the City.  We need an experienced candidate with leadership ability and solutions that will work for the people, not against them.

The public hearing for the City budget scheduled for Tuesday night was postponed until May 16, 2011 at 6:30PM and will be held at We need a big showing at this hearing to tell the Mayor and Council that we will not put up with eliminating the 3% tax cap put in place by voter referendum.

The location of the public hearing on the proposed City budget has been changed to Amsterdam’s Riverfront Center on May 16, 2011 at 6:30PM.  A public meeting in a private venue that prohibits photography, should be interesting.

3 thoughts on “Her Majesty Queen Ann Has Spoken!”